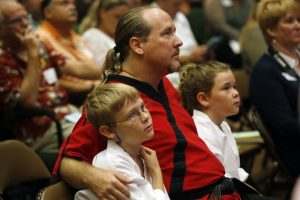 You need a license to drive, fish, boat, hunt, get married and to do most trades, but the most important job in the world, and the most dangerous, being a parent, requires nothing.

We see some great parents every single day in our studio. They are smiling at their kids, giving them thumbs up and praise when their kids are trying hard. They often attend class with their kids but even if they are not students themselves, they are committed to being strong parents and doing what’s right for their child. On the other hand, we see some really scary bad ones too. We help people where we can, but it is not uncommon for us to let someone know, “We don’t think this is the right martial arts school for you.” We NEVER do it because of the child, but always because of the parent. Kids are kids and we can help them and shape them. They are little sponges. But when you have a parent so set in their ways that they are not going to be uplifting, supportive, involved and are not going to back our play when their child hits a plateau, then we know we are going to have a problem.

One woman gave us a bad online review after we let her know we wouldn’t take her child as a student. She thought it was because the child was autistic, which is totally not true, 3 of my adult Black Belts were those autistic boys once upon a time. One is a world class instructor today working for Ancient Ways. I didn’t want to embarrass this mom further, when I was letting her know we couldn’t take her son as a student, but when she began the introductory private lesson with her child by grabbing him by the head and yelling in his face, there’s a problem, and I don’t want that in my studio.

Parents, if you think your parents did a great job with you, and you are raising your kids the same way, then super, but I’d still bet that we’ve learned a few things about child development and psychology since your parents were doing the job. Perhaps “doing it like our parents,” isn’t the best approach. If you are struggling with ANYTHING related to your child and don’t know where to turn, there are MANY resources and you are welcome to include me as one of them, but don’t just “wing it.” The decision you make could ruin their life and if you think it’s not that important, I’d like to point out that Hitler, Stalin and Mao Zedong all had parents who thought they were doing a super job. These men were responsible for the deaths of millions. Take the job seriously, read a book or twelve, watch some Youtube videos, ask successful parents.